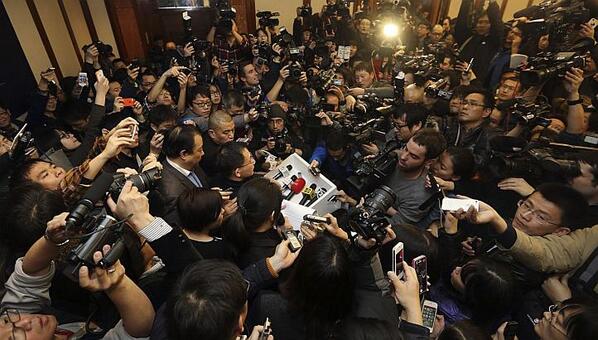 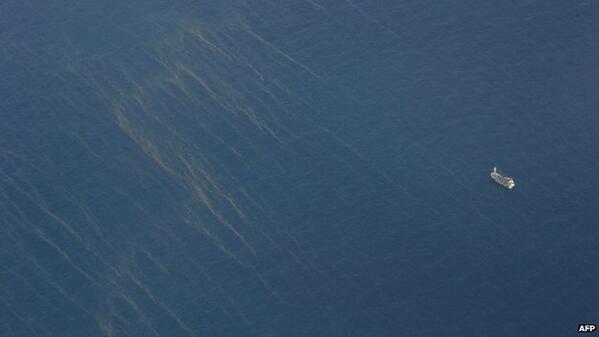 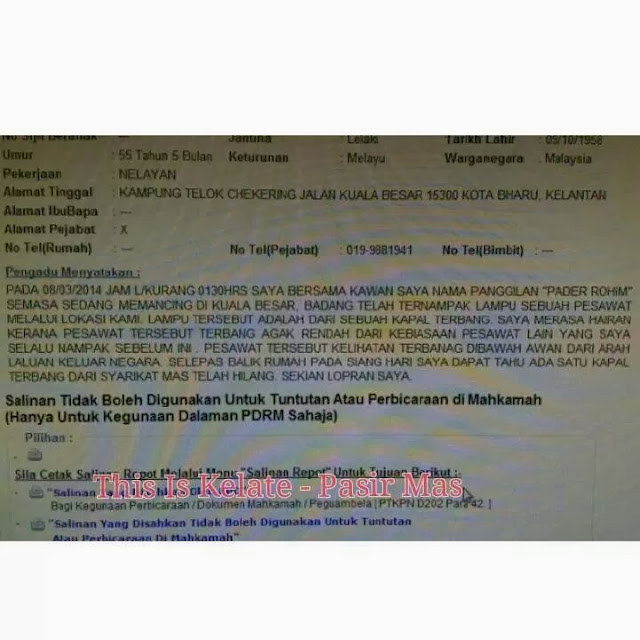 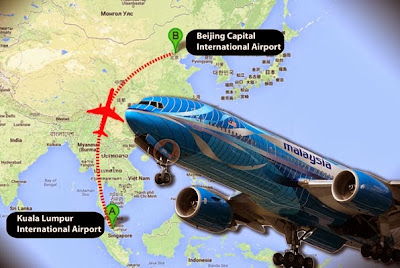 KUALA LUMPUR, Malaysia—A search-and-rescue plane spotted suspected fragments of a missing Malaysian airliner in the first potential breakthrough in the investigation of what happened to the flight after it disappeared early Saturday morning.

The fragments were believed to be a composite inner door and a piece of the plane's tail, Vietnam's ministry of information and communication said on its website. The objects were located about 50 miles south-southwest of Tho Chu island.

Officials released a photograph of one fragment floating in the water. Malaysia Airlines 3786.KU -10.00% said it had received no confirmation regarding the suspected debris.

The mystery over what happened to Malaysia Airlines flight MH370, carrying 227 passengers and 12 crew members, baffled investigators and airline officials for much of the weekend.

The flight vanished early Saturday in its flight from Kuala Lumpur to Beijing. The disappearance triggered a search-and-rescue operation across portions of the Gulf of Thailand and South China Sea, involving the armed forces of several nations, including the U.S., Malaysia, Vietnam and China.

Vietnam's air search was set to resume Monday. The Vietnamese government said it couldn't land a seaplane near the objects to investigate them further because it was getting too dark.

Investigators and aviation experts were struggling to develop theories about what happened to flight MH370. BoeingBA -0.25% 777s, including the one that disappeared, are equipped with transponders that broadcast details of the plane's altitude, direction and speed. But the transponder on the Malaysian plane apparently didn't report anything amiss.

Airliners such as the Malaysian jet also carry emergency beacons to transmit the aircraft's location in the event of a mishap so that rescue teams can reach the site. These beacons, called emergency locator devices, are activated by impact on land or water, along with other emergency communications equipment.

Two experts said that if the aircraft suffered damage at a high altitude, it may have disintegrated, and small parts of the plane could have been dispersed over a large area.

"If it was a catastrophic event at cruise altitude, the debris field would be hard to detect. In theory, there would be no large sections of the airplane left intact," said Jonathan Galaviz, a partner with Global Market Advisors, an aviation and leisure consulting firm.

"Never have I seen an aircraft losing control and losing all communication," said Mark Martin of aviation consultancy Martin Consulting. Even in the crash of an Air France flight in the Atlantic Ocean in 2009, the emergency beacon directed rescuers to the site of impact, though strong currents dispersed the debris across a wide area.

The investigation into the Malaysian flight was also complicated by revelations that two passengers appeared to have boarded the plane with stolen passports, prompting airline executives and aviation officials to say that foul play can't be ruled out.

Malaysia's police chief, Inspector-General Khalid Abu Bakar, told reporters in Terengganu on the country's South China Sea coast that while investigators "don't dismiss the possibility" of terrorism, they weren't considering it the most likely cause for the disappearance of flight MH370.

Rescuers are looking at the possibility that the plane could have attempted to turn back to Kuala Lumpur. Military radar readings indicate the plane may have reversed course, the country's air force chief said. Gen. Rodzali Duad said the military is still studying the radar data, and added that it is corroborated by some civilian radar data.
View Slideshow

A woman cries in the arrival hall of the International Airport in Beijing, China, on Saturday. Associated Press

The flight included passengers from more than a dozen nationalities, with just over half of them Chinese.

A Malaysian aviation official said at the briefing that the aviation regulator is investigating video recordings of two passengers carrying stolen passports, from check-in to departure. Two people—an Austrian and an Italian—listed as being on the missing jet weren't on the flight. Their passports had been stolen in Thailand.

A 30-year-old Austrian, Christian Kozel, whose name was on the passenger list for the flight wasn't on board. His passport was stolen in Thailand in 2012, an Austrian Foreign Ministry spokesman said.

Another passenger on the list, Luigi Maraldi, an Italian citizen, wasn't on the plane either, Italy's Foreign Ministry said Saturday. Mr. Maraldi's passport was stolen in Thailand a year and a half ago, his father said.

On Sunday afternoon, a statement issued in the name of a previously unknown group claimed that the disappearance of the plane was a political act aimed at the Chinese and Malaysian governments and referred to last week's attack in a Chinese train station that Beijing blamed on Uighur separatists. It stopped short of a claim of responsibility. Malaysian officials said that they were unaware of any claim of responsibility but would investigate all possibilities.

A European security official said it wasn't uncommon for passengers to board flights using stolen passports. In addition, Beijing has emerged as a bustling transit hub in recent years, providing connecting flights to Europe and elsewhere from other parts of Asia, buoyed in part by a 72-hour visa-on-arrival program.

Until the plane is definitively located and its flight recorders recovered, there is little real prospect of figuring out what really caused it to vanish, aviation analysts said. And the longer the search goes on, the less likely it is that any survivors would be found.

At a news conference in Beijing Sunday afternoon, a member of the airline's crisis-management team, said the airline has told family members of passengers to "expect the worst." Ignatius Ong said Malaysia Airlines would make travel arrangements for Chinese family members who wished to fly to Kuala Lumpur to await more news.

Many relatives in Beijing were overcome with grief as they awaited news. Sounds of weeping poured out of rooms of the Metropark Lido Hotel, about 20 minutes from Beijing Capital 600008.SH +1.02% International Airport where the airline had set up a help center for friends and relatives of the passengers. Some of the family members crouched in the stairwells, their cries echoing into the hallways.

Zhang Zhiliang, from Tianjin, and his family huddled in a stairwell in the hotel, crying, "I don't understand." His 26-year-old cousin, also from Tianjin, was on the flight.

A team of American aviation accident investigators, led by National Transportation Safety Board experts, was en route to Asia to provide assistance regarding the missing jet. The team, including technical advisers from Boeing Co. and the Federal Aviation Administration, left the U.S. Saturday and would "be positioned to offer U.S. assistance," the board said. The NTSB is unlikely to head up what is bound to be a complex and extensive probe, but the board's expertise is likely to play a big role in establishing the chain of events. China, Malaysia and Vietnam, which are currently searching for signs of wreckage, could formally request certain types of help from the U.S.

The NTSB's decision, according to air-safety officials, indicates that at least at this point, U.S. aviation regulators and safety watchdogs are treating the plane's disappearance and presumed crash as an accident rather than an act of terrorism.

The officials stressed that could change as more details surface. For now, though, it is the NTSB investigators, rather than law-enforcement or antiterrorism officials, who are leading Washington's public response.

Corrections & Amplifications
Air France Flight 447 crashed into the Atlantic Ocean in 2009 while flying from Brazil to France. An earlier version of this story incorrectly said the aircraft had crashed in the ocean off Argentina.

Write to Jason Ng at jason.ng@wsj.com 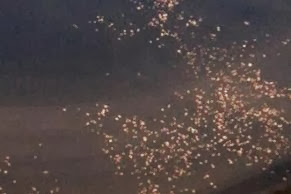 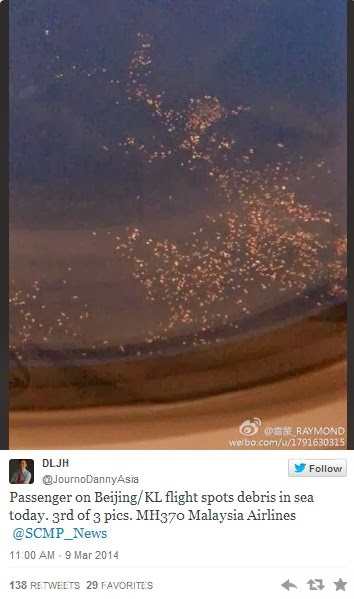 By now, the Vietnamese search and rescue ships should have reached the suspected crash site of MH370. Get more details of the Viet operations here:http://bit.ly/1qiUHst 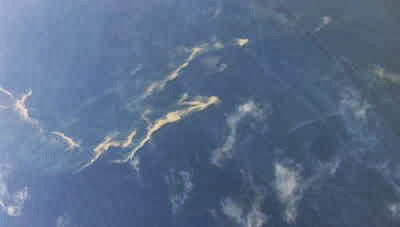 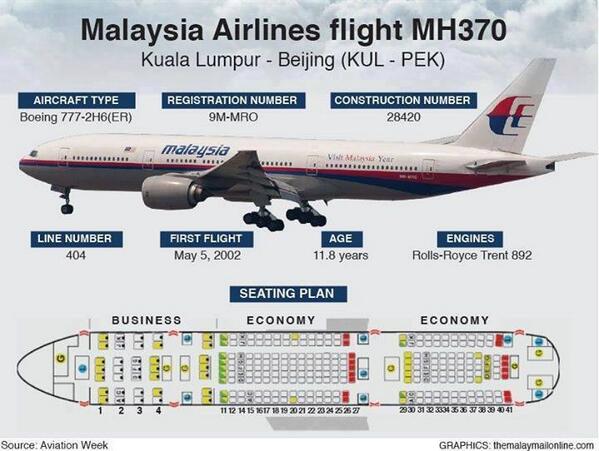 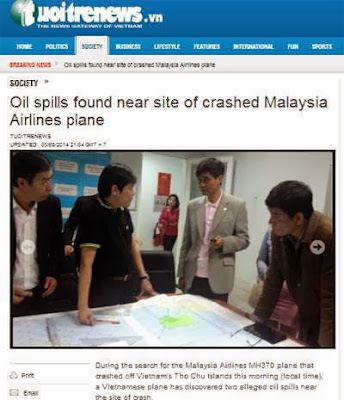 Deputy Minister of Transport Pham Quy Tieu (2nd, R) is directing the search for the crashed Malaysian plane
During the search for the Malaysia Airlines MH370 plane that crashed off Vietnam’s Tho Chu Islands this morning (local time), a Vietnamese plane has discovered two alleged oil spills near the site of crash. 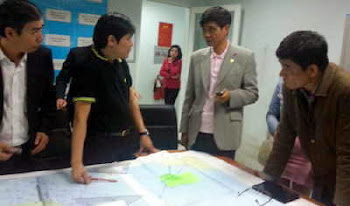 An hour later, the plane discovered another alleged oil spill about 150 km from Tho Chu Island.

The plane later left the area as it was getting dark, causing difficulties to the search.

Meanwhile, three Vietnamese vessels, including a naval ship, a coast guard boat and a rescue boat, were sailing to the site of crash.

Deputy Minister of Transport Pham Quy Tieu has been directing the search for the Malaysian plane.

So far, the search and rescue agencies of both Singapore and Malaysia said they have found no signs of the crashed plane.

The Vietnamese authorities have informed both Singapore and Malaysia about the alleged oil spills for verification.

The flight MH370 disappeared at 1:40 am local time (1840 GMT Friday), about two hours after it left Kuala Lumpur International Airport.

The plane was carrying 239 people from 14 countries from Kuala Lumpur to Beijing, China when it crashed.

There is no reports of casualties so far.

Lai Xuan Thanh, head of the Civil Aviation Administration of Vietnam, said that it is an abnormal phenomenon that the Malaysian plane had not automatically sent its signals to satellites. -Tuoi Tre 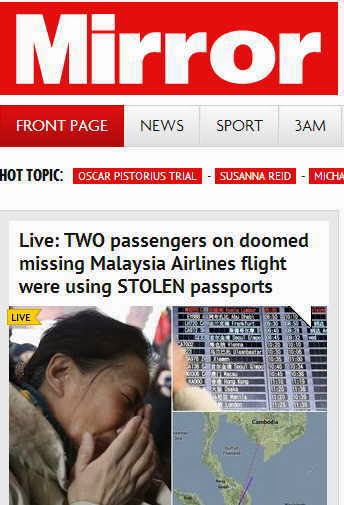 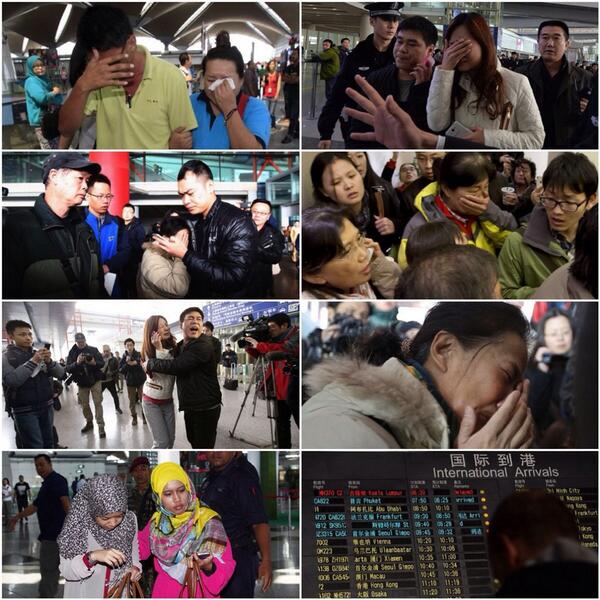 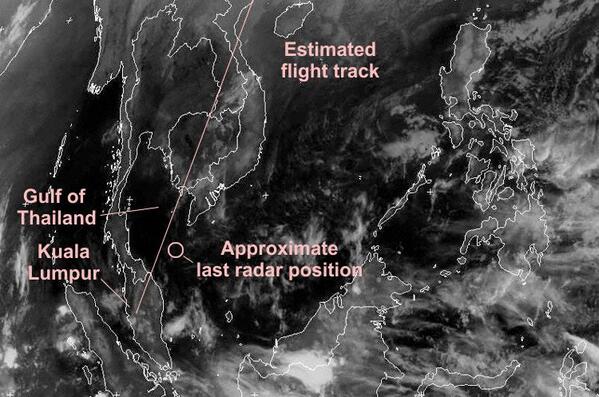 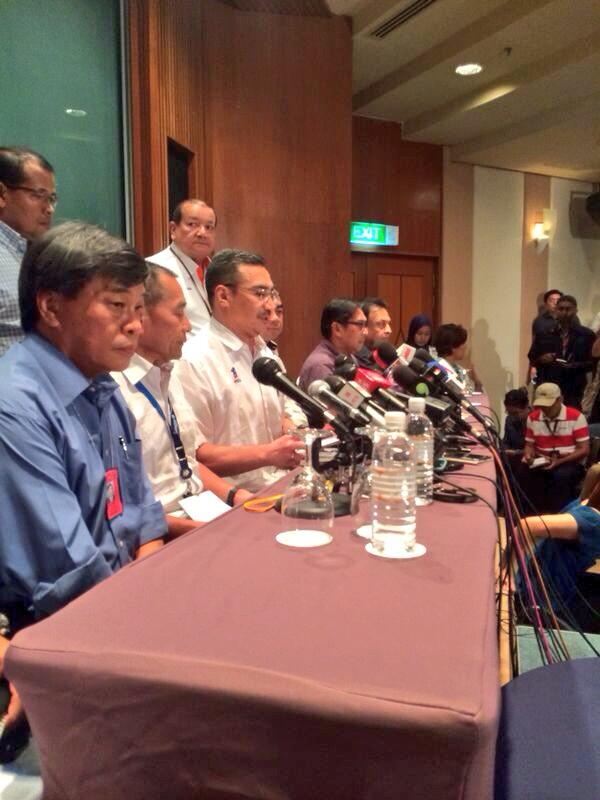 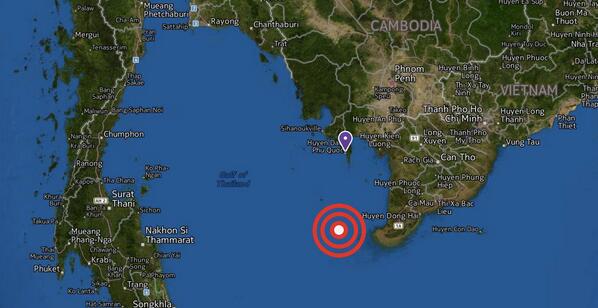 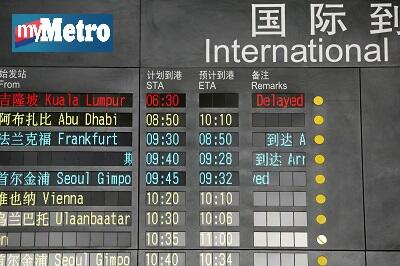 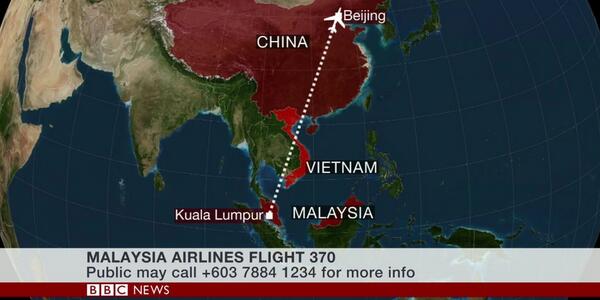 #‎SGBudget‬: Dr Ng: By 2030, the Army will be equipped with future systems that will be part and parcel of the SAF. The number of units that will operate on wheeled or tracked platforms will almost double and soldiers will be better equipped to tackle threats in the increasingly complex urban environment. Possibilities include multiple micro-UAVs for individual soldiers.

And the SAF as a whole will be better able to defend Singapore against a wide spectrum of security threats.