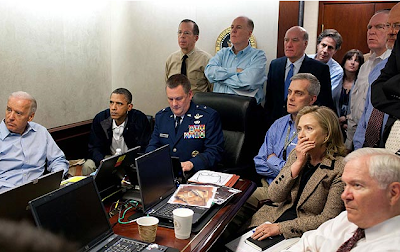 By SIMON HUGHES, VIRGINIA WHEELER, DAN SALES and NEIL MILLARD
Published: Today
Add a comment (117)
THE world's most evil man was consigned to the dustbin of history yesterday - shot in the head, tied up in a weighted bag and dropped in the ocean.
Osama Bin Laden finally paid the price for atrocities such as 9/11 when he was found by US Special Forces at his luxury lair in Pakistan.

He was killed as he cowered behind his wife - and President Barack Obama watched live via cameras worn by the troops. The 54-year-old warlord was buried in the north Arabian sea, his terror reign over at last.

President Obama's eyes were glued to a screen showing the dramatic moments leading to the death of Bin Laden.

US President sees live feed of al-Qaede leader and 9/11 mastermind taken out
News
Tense Secretary of State Hillary Clinton joins her boss and advisers to watch the momentous events unfold in real time.

The President declared simply "We got him" after images beamed to the White House from cameras on Navy Seals' headgear showed the terror chief being targeted in his Pakistan compound.

Mr Obama could not hide his relief when he realised the deadly reign of Bin Laden - codenamed Geronimo by US officials - was finally over.

The breakthrough in the hunt for the evil warlord came after detainees at Guantanamo Bay prison camp were tortured, it was revealed last night.

US officials said controversial techniques including water-boarding and sleep deprivation were directly responsible for helping security forces find the warlord. Prisoners interrogated after the 2001 terror attacks identified a "courier" who provided direct support to Bin Laden after he fled Afghanistan.

CIA interest grew further when it was established it had no phone or internet link. Bin Laden was known to avoid all electronic communication - fearing his location may be tracked by satellite.

Compound ... close to military base
Following his death, the Americans used DNA evidence to prove with "99.9 per cent certainty" they had their man.

His samples were compared with some from his sister's brain - collected after her cancer death several years ago.

Blaze ... Bin Laden's compound on fire after raid
Further details of how the world's most wanted man was brought to justice were revealed at a Washington news conference last night.

US counter-terrorism adviser John Brennan said that, in sanctioning the strike, President Obama had made "one of the most gutsiest calls of any president in recent memory".

He said US Special Forces had been prepared to take Bin Laden alive - but that he had refused to give himself up.

The senior official said the terror chief's use of his wife as a human shield showed his true character - as did hiding in a million-dollar mansion while ordering others to carry out murderous attacks.

Inside ... US forces take on Osama
Mr Brennan said: "Here is Bin Laden who is calling for these attacks living in this million-dollar plus compound, living in an area far removed from the front - hiding behind women who are put in front of him as a shield.

"I think it really does just speak to how false his narrative has been over the years. Looking at what Bin Laden is doing hiding there while he's putting others out there to carry out attacks again speaks to the nature of the individual he was."

Asked if the plan had always been to kill the al-Qaeda boss, Mr Brennan said US forces had been prepared "for all contingencies".

He said: "He was engaged and killed in the process. Had we had the opportunity to take him alive, we'd have done that.

"It was very tense. When we were informed the individuals in that compound had found an individual they believed was Bin Laden there was a tremendous sigh of relief."

Mr Brennan added: "We're looking at how he was able to hold out so long. I think it's inconceivable that he didn't have a support system."