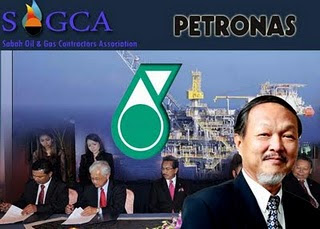 MANY sound thinking people in Sabah have totally rejected the claim by the State assemblyman for Bongawan Datuk Karim Bujang on saying that it is no need to have an increase in the royalty rate on our Sabah oil and gas production from Petronas.

Instead, he said that it is better to have more Petronas projects in Sabah. He further opined that Petronas had done much for the people and the State of Sabah.

Karim concurred that Petronas had contributed significantly to the economy of the state and benefited the livelihood of its people. He added that the Petronas has undoubtedly spent billions of ringgits to implement various projects in Sabah that gives direct benefits to the people including local contractors as well as the economic spin-offs to be enjoyed by locals.

The Kota Kinabalu Member of Parliament Hiew King Cheu viewed Karim’s points as short sighted and narrow. May be Karim did not see the good and the impact on having higher royalty rate from the present 5% to 20% as called for by the Pakatan Rakyat.

The projects put up by the Petronas in Sabah are definitely under the clauses in the agreement set up long time ago, and Sabahan deserved it anyway. It is our right to enjoy all the development and benefit from it. The question is why we did not see all these being put up in the past decades. Is Petronas not aware of these terms in the agreement or is it under their wish and will?

The increase in the rate of Royalty on the oil and gas will definitely increase the revenue of the state and this will surely out beat the project costs in the long run. Just imaging for the past decades, Sabah had just received a total sum of RM5.3 billion from Petronas.

With this small sum on the sharing will there any significant in terms of achieving higher economic growth and more benefits for the people? If the rate is increased to 20%, Sabahan will enjoy an instant injection of state fund into our state coffer, and the state financial status will then be improved.

Can the local people see some instant benefits from the Petronas project here in Sabah? May be a few of the BN contractors and other expatriate contractors can get jobs. How long do we have to wait for a return from these projects, another five or ten years? May be by then our oil fields had already run dry and closed down.

This is especially so when our oil fields are not in the form of a seam layer but pocketed and spread out in the sea. The extraction cost will be much higher and sometimes it is not economical to work on. Some of the oil fields were already closed down. That means to say that Sabah will have to make the best use of the time to gain better royalty rates now or never, and before the oil and gas ran out eventually.

We cannot allow this to go on, and this is the time to let Sabah have some goodies and to help the Sabahan from being poor anymore. We should see what our neighbor Brunei is doing and on how they treat their people. The Brunei people are enjoying the best and pay no income taxes too. Why are we the oil and gas producer state and yet we are the poorest state in Malaysia. We have the highest poverty rate because there are 42% of the nation’s poor is in Sabah.

Are we losing or winning, or should we fight for a higher oil and gas royalty? Vote BN you will not get this, but if you vote Pakatan Rakyat in the coming election there is a chance to be better in the future.
di 7:21 PG